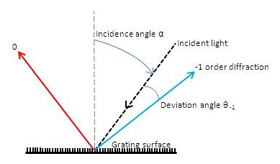 Angle of Incidence, AOI
The angle (α°) between incident light and the grating normal.

Laser Induced Damage Threshold (LIDT)
Defined as permanent surface change and expressed in J/cm² or W/cm² and depends on factors like pulse energy, pulse duration and repetition rate, wavelength and beam profile (intensity profile). These factors vary between setups, and Spectrogon can not state a customer specific LIDT.

*Laser Induced Damage Threshold results have been measured according to ISO 21254-2: 1000-on-1 test procedure.

Deviation angle
The angle θ between incident light α and -1 order diffracted light β. (θ° = |α°- β°| ),  β° being the diffraction angle. Also called Include angle. When the deviation angle is 0°, the grating is in so called Littrow configuration, and the AOI is called the Littrow angle.

Diffraction order
For most applications only one diffraction order is used, and one would like all the diffracted light to go into that order giving an absolute efficiency of 100 % for all wavelengths.The diffracted order with m = -1 is the order normally used in monochromators, spectrographs, and spectrometers. Please use our Grating Design Tool to minimize diffraction orders and energy losses.

Littrow configuration
The grating is mounted so that light of the desired wavelength is diffracted back along the incident beam, and the wavelength is scanned by rotating the grating. Generally, an intracavity achromatic lens is used, which expands the laser beam to fill a relatively large area of the grating. The zero order diffracted beam can be used as the output laser beam; however, a disadvantage is that the beam will have different directions as the grating is rotated.

Grazing incidence
The grating is kept fixed at an high angle of incidence, and the wavelength is tuned by rotating a special tuning mirror. No beam expanding lens is needed, and therefore a smaller grating can be used. The large incidence angle implies, however, that the ruled width of the grating has to be considerably greater than the groove length.

Sinusoidal gratings
Holographically manufactured diffraction gratings of standard type have a sinusoidal groove profile. The efficiency curve is rather smooth and flatter than for ruled gratings. The efficiency is optimized for specific spectral regions by varying the groove depth, and it may still be high, especially for gratings with high frequency. When the groove spacing is less than about 1.25 times the wavelength, only the -1 and 0 orders exist, and if the grating has an appropriate groove depth, most of the diffracted light goes into the -1 order. In this region, holographically recorded gratings give well over 50 % absolute efficiency.

By continuing to use the site, you agree to the use of cookies. more information